Should I Join A Frat? – The Pros & Cons Of Joining A Fraternity

Frats, or fraternities, are an iconically American symbol when you think about going off to college.

I mean, think about what you see glorified in all of the Hollywood movies: massive frat parties, filled with frat bros…doing frat things.

Alright, maybe I’m not selling it, but that’s actually not where the concept of a frat even came from.

In fact, the origins of fraternities goes way back in American history.

One of the first frats, Phi Beta Kappa, was even founded in 1776. Similarly, Kappa Alpha, which is still active, started out in 1825.

And, while frats might be the source of wild college parties and debauchery these days, the original concept of joining a fraternity was to network with other people, help the community, and create new business relationships.

Many frats still adhere to this mission today, or at least, they try to.

But if you’re going off to college soon or are already in first year, you might be asking yourself: should I join a frat?

Well, there are plenty of reasons why people join fraternities, as well as advantages and disadvantages of joining a fraternity you should consider.

So, in this post, I’m outlining everything you need to know about frats to decide if Greek Life is the life for you.

As mentioned, the term “frat” refers to fraternity.

The word comes from the Latin word “fraternitatem,” which basically means brotherhood or a group of dudes who have similar interests. 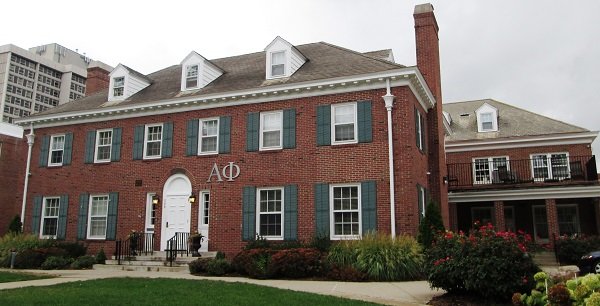 These days, frats are immensely popular in U.S. colleges and universities. You can also find frats at Canadian schools.

Typically, a frat is an entire organization that spans across the country and has smaller chapters at individual schools.

So, you might join the Kappa Alpha frat, but your local chapter is the one at your specific college.

Most frats still use some sort of Latin/Greek name to pay homage to their origins, hence why you can find Greek frats on most college campuses.

Some frats, on the other hand, are for groups of specific students. For example, the college I went to has a Greek frat, Jewish frat, and vet student frat.

Now, I didn’t join a frat in college for reasons I’ll explain below.

But, before we jump into if you should join a frat or not, let’s break down what fraternities typically do.

What Do Fraternities Do?

If you’re wondering about the benefits of joining a fraternity, you really need to understand what frats do since this has massive implications for your daily life and overall college experience.

Frats are always running some sort of community initiative on or off campus.

Commonly, this involves fundraising for certain charities or volunteering hours at local charities. As a frat member, you’re typically expected to help in fundraising efforts and to donate your time.

Another things frats do is promote the personal and career development of members.

This can occur in a few ways, but usually, an older frat member kind of takes a younger member under their wing and shows them the rope.

This might involve working out at the gym more, performing better in sports, or just getting used to campus life more.

Since frats also help you meet other dudes, you also expand your professional network, which can help out later in life (this used to be one of the main selling points of frats without a doubt).

Alright, let’s not beat around the bush: frats are known for throwing parties. 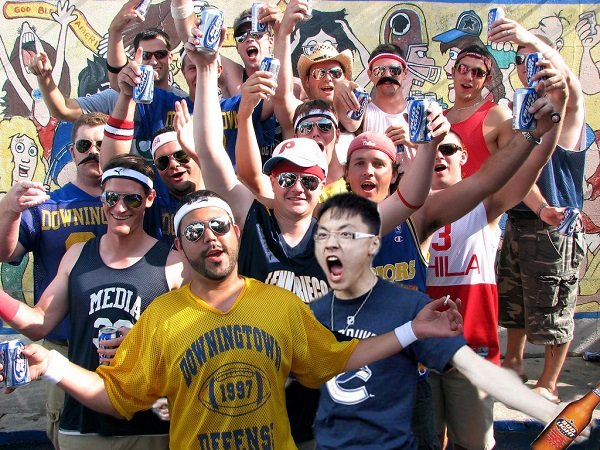 But, as mentioned, fundraising is a massive part of what frats do.

And, to raise funds, fraternities often host galas, keggers, parties, or events on campus where ticket proceeds go towards some initiative.

Looking for some awesome party games? Definitely check out our posts on the Medusa Drinking Game and FuzzyDuck Drinking Game!

One other thing that frats sometimes do is give out scholarships to students.

For example, the Alpha Fi Fraternity gives out scholarships every year to high school students who need financial assistance getting into college.

This isn’t something every frat does, but it’s another type of community initiative that’s pretty cool.

Should I Join A Frat? – Here Are Some Benefits

So, let’s break down a few of the reasons to join a frat:

Why You Shouldn’t Join A Frat

Alright, so we’ve covered some reasons to join a frat, but as I mentioned, I didn’t join one in college and I have zero regrets about that decision.

I’ll cover my own personal reasons in a bit, but here are some common downsides to joining a frat that are worth considering.

According to Edmit, the annual cost of joining a frat can easily cost $5,000+ per year!

Granted, many frats aren’t thousands of dollars per semester, but you can’t ignore the cost of membership regardless of how you do the math.

This is by far one of the main cons of joining a frat. Not only are you paying tuition, but you’re also paying a membership cost for your fraternity.

Granted, many frats offer accommodations for members. So, in a sense, you can live at your frat’s chapter house and pay for that instead of paying residence fees or for your own rental somewhere.

But, in my experience, renting a college party house with a bunch of friends was a ton of fun. At the time, my rent was around $550 per month; a fraction of what the numbers show you’re paying for a frat membership.

While hazing isn’t always something frats do, a lot of fraternities still haze as part of the frat pledging process.

In other words, before you’re a member, you have to prove you trust your fraternity brothers and are willing to make personal sacrifices to join the frat. 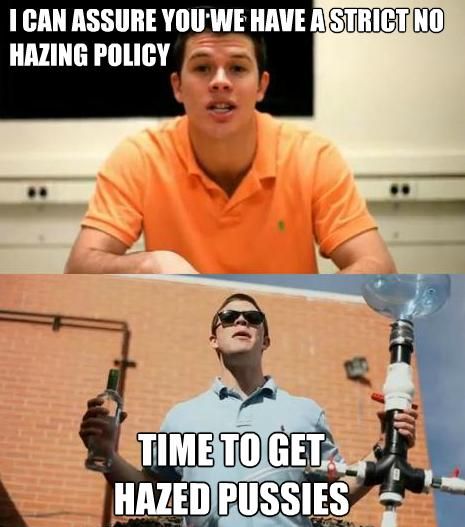 These are light to mild forms of hazing.

But, some more serious examples of frat hazing include physical abuse, sexual abuse, branding, kidnapping members, and forcing people to walk around nude.

Yes, this stuff actually happens. People have even died from frat hazing.

Again, this is somewhat less common, and in my opinion, a bit of light hazing is something a lot of guys go through anyway, be it from high school sports or just hanging out with dudes.

But, before you decide to join a frat, find out what the pledge process is like because some of this stuff is absolutely ridiculous and not worth it.

3. Potentially Less Important Than Before

When frats first started, the idea was to group like-minded individuals together in a sort of elite social club.

And, throughout history, American frats have helped business owners and entrepreneurs find their starts in life.

In other words, joining a frat used to mean you were tapping into some upper echelon of society in a way, expanding your network in a way that might otherwise have been impossible.

These days, this isn’t really the case.

Firstly, many frats are just party houses that loosely pay homage to the frats of old; you aren’t joining any top secret, elite societal club by becoming a member.

And, these days, things like internships or literally just using LinkedIn can help you meet the right people.

Extra Reading – Signs Of A Gentleman.

Why I Didn’t Join A Frat In College

So, when you’re reading this post, you might think there’s a lot of fraternity benefits that make it worth joining.

But, in my opinion, you can have an unreal college experience where you meet lots of people and network without having to pay to join a frat.

Plus, at my school (in Canada), frats are a joke anyway…an actual meme.

So, for most students, I’d say skip it unless you know exactly what sort of social and career benefits you’ll gain.

If you’re very shy and need a sense of brotherhood, maybe consider it. Or, at the very least, play some sort or team sport or join some clubs!

How To Join A Frat – The Fraternity Pledge Process

If you’re wondering how to  get into a fraternity, here are the general steps you usually have to take:

During this entire process and after joining, you’ll also be expected to attend social events, help out in the community, and attend chapter meetings.

Again, some frats are much more serious than others, so do your research and scout a few campus frats before making a decision.

1. Can You Join A Fraternity After College?

This one is hit or miss depending on the frat.

But, when I searched online, I found various Reddit and Quora threads where different frats stated they accept all members:

Now, you probably won’t be living in a frat house or going to all the parties, but older frat members can help provide guidance for younger ones, donate, and help with community initiatives.

This depends on your definition of “bad” and what you do once you’re in a frat.

Frats do a lot of good things, like set up scholarships, help young men improve their social/academic/physical skills, and improve their community.

However, some frats also party too much and too hard.

As most things in life, don’t paint this one with a single brush stroke.

3. Are Fraternities Worth It?

Again, this depends on your college goals.

In my opinion, frats are worth it if you can network with them, membership isn’t too expensive, and you need help getting friends.

But, I don’t think they are necessary or worth the cost most of the time.

Many frats still haze as part of the pledging process.

Pretty much all schools have banned hazing, but hazing is just a part of the pledging ritual.

Granted, a lot of frats won’t be as intense as some of the horror stories you see in the news. But, expect some pranks and jokes at your expense.

Well there you have it: all of the pros and cons of joining a frat and what you should expect.

I hope our guide helps you decide if you should join a frat or not.

Frats weren’t for me, but at the end of the day, you need to do what’s right for you.

My main advice is to try playing sports, going to the gym, joining clubs, and meeting new people whenever you can.

Classes themselves suck. I’ll hold this opinion until the day I die.

But, the rest of college can be quite amazing, but you have to get out of your comfort zone a bit! 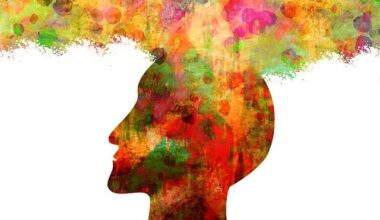 Read More
I’m writing this post at the start of a new year because, if I’m honest, I’ve always been…
DDevelopment

Read More
There are some things we can all agree are serious turn-offs. Here are 7 unattractive things guys do…